Due to printing issues, these copies have a darker chapter page, which makes some of the words illegible.

(Bonus signatures may appear in some copies.) 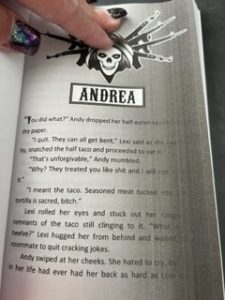 When the ghosts of the past live rent-free in a man’s heart, there’s no room for anyone else.

For Nick “Thunder” Taylor, flying and the military meant everything. When life took an unexpected turn, he replaced one Hawg with another, embracing the brotherhood he found with the Phantoms. However, burying his past doesn’t mean it won’t come back to haunt him.

After he patched in, Thunder had an unforgettable encounter with an amazing woman only for her to ghost him.

Three years later, he’s outraged when she walks into his clubhouse and acts like the whole thing never happened. Now he’s torn between discovering her game or playing a more pleasurable one with her.

Either way, she’s not going to right her skirt, say thanks, and just walk away again.